Posted by emilyyvt in FMDS, Must-Haves and Trends, News, Weekly Obsession on May 9, 2014

The annual Met Gala, which occurred Monday night at Metropolitan Museum of Art’s annual Costume Institute Gala in New York City.  Every year there is a theme if you can remember last year’s punk dress code. Since the gala was honoring American couturier Charles James, an English-born American designer known for his structured wiring and lavishly heavy gowns, guests were asked to channel James’ formal aesthetic of gowns for ladies and white tie (with decorations) for men.

Above all I think my favorite of the night was Rihanna.  The gal can seriously do no wrong.  She stunned in a Stella McCartney number that included a cropped top with a stunning open back and a floor-length skirt with a full train and draping along the back.

Naturally Beyonce, and her hubby Jayz killed it as well–he actually proposed to her again when one of the many jewels from her Givenchy wrap dress fell off.  So yeah, my jealousy continues. Leah Michele in Joseph Altuzarra and the Beckhams in Ralph Lauren and Victoria Beckam’s own design, all dazzled on the red carpet. All white ensembles proved to be a BIG trend on the red carpet. 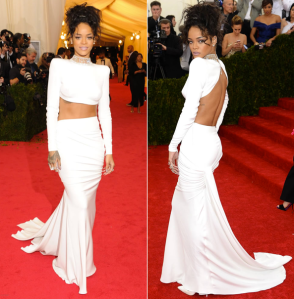 The United States Olympic uniforms have been unveiled. For the opening ceremonies the athletes will be decked out in red, white, and blue. While the outfits were designed by Ralph Lauren, a prestigious American designer, they are manufactured in China.

Needless to say this has caused outrage throughout the public and government. Senate majority leader Harry Reid was quoted as saying, “I think the Olympic committee should be ashamed of themselves.” People all over the government are not happy with this decision.  Steve Israel, a House Democrat, was upset as well and stated “Today there are 600,000 vacant manufacturing jobs in this country and the Olympic committee is outsourcing the manufacturing of uniforms to China?” One member went so far to say that the outfits should be burned and re-made in America.

When new stations reached out to Ralph Lauren and the U.S Olympic Committee, asking why the outfits had not been made in America, the committee made this statement: ““The U.S. Olympic team is privately funded and we’re grateful for the support of our sponsors. We’re proud of our partnership with Ralph Lauren, an iconic American company.”